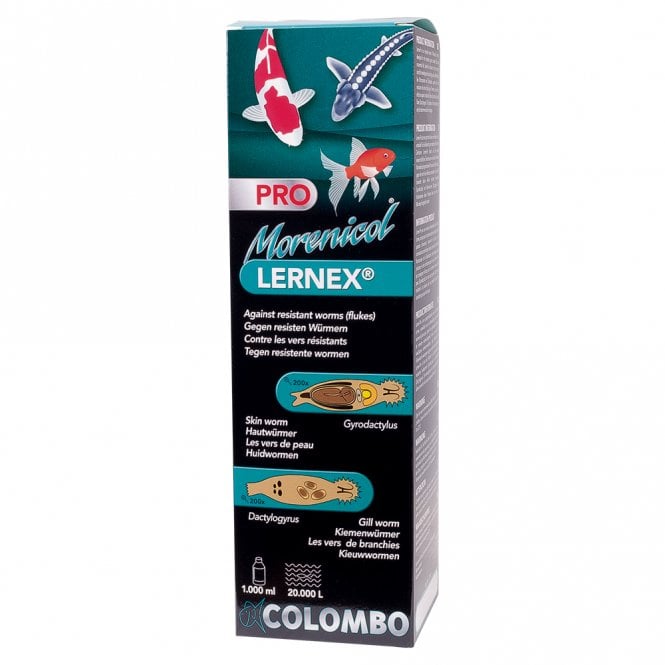 Colombo Morenicol Lernex PRO is an improved version of Colombo Morenicol Lernex, developed for the treatment against resistant flukes on ornamental fish. Lernex PRO is based on the most recent scientific knowledge and contains high quality antihelminthics like Nitroscanate and Flubendazole, against which no resistance has been built up yet. Therefore, Colombo Lernex PRO is effective against resistant skin flukes (Gyrodactylus) and gill flukes (Dactylogyrus). The presence of these parasites can only be determined with a microscope.

Skin- and gill worms (flukes) are flattish trematodes, 0.3-0.5 mm in size which were previously relatively uncommon in pond fish. However, nowadays they are regularly encountered. Gyrodactylus is the skin worm. This worm gives birth to living young and is therefore capable of rapid and massive reproduction. The resultant skin irritation gives rise to thickening of the skin and to the production of a slimy mucous layer over the skin.

The gill worm is called Dactylogyrus. This parasite lays eggs. It causes damage and irritation to the gills with resultant thickening and loss of full function. Infested fish rub their gills on plants and stones. In advanced cases they swim with the gills permanently opened and they can even die.

Instructions For Use:
Always read the complete manual carefully prior to use.

A measuring cup is included in the box. Ensure optimal pond aeration during treatment.