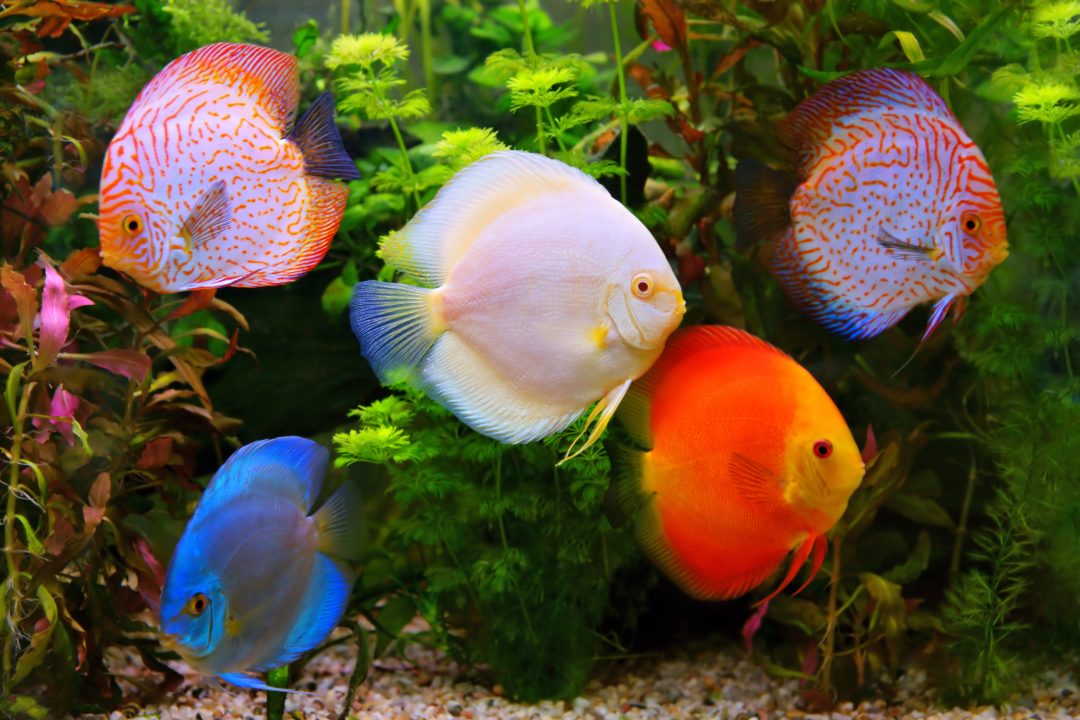 The beauty of fish is that they come in all different shapes, sizes and colours. However, not all will have the ability to adapt to a freshwater aquarium environment and some species require more care than others.

Whether you’re new to fishkeeping or simply want to find some new additions to your aquarium, here at Pond Planet, we’ve made a list of the best freshwater aquarium fish to fill your tank.

One of the best freshwater aquarium fish regularly found in home aquariums is the Guppy fish, as they’re renowned for their low-maintenance nature and vibrant colour. Male Guppies tend to be the more vivid of the two sexes but appear smaller in size, growing to around 4 centimetres long, while the females of the species tend to be duller in colour but larger in size. Guppy fish are live-bearing, which means their offspring are able to swim directly after birth and can live independently. It is important to note that offspring need to be kept in a separate tank as they are often eaten if left in the same tank! To avoid this, be sure to use two tanks if they do breed.

The Harlequin Rasbora is another winner when it comes to types of freshwater fish. Like Guppies, these fish have a peaceful nature and are easy to look after, making them one of the best freshwater aquarium fish for all levels of experience. Due to their vibrant colours, the Harlequin Rasbora also makes a stunning addition to your fish tank. It’s important to note Harlequins are shoaling fish and should be kept in schools of 8 to 10.

Platy Fish are known to be small, peaceful fish that often differ in size, colour and fin shape due to their mixed breeding. Similar to the Guppy, Platys are live-bearing fish. You should find these laid back fish easy to care for and low-maintenance as they can be seen swimming and eating after a few hours after birth. Again, it is best advised to keep male and female in separate tanks for breeding purposes.

Small and easy to take care of, Zebrafish are another popular choice when it comes to types of freshwater fish for aquariums. Zebrafish in their early stages are transparent until they reach maturity. Once in adult form, they develop stripes which are usually blue in colour and are located along the length of the body. Zebrafish are also schooling fish, which means they travel in synchronised movement and swimming. Due to this, it’s important to ensure there is enough room in your tank for Zebrafish to swim freely.

The Kuhli Loach fish is a longer type of freshwater fish, with an eel-like look about them. Known for being scavengers, they tend to seek their food at the bottom of tanks. Kuhli Loach can be one of the best freshwater aquarium fish and a great addition to your tank. However, despite their small size, they are generally considered better-suited for intermediate and experienced fishkeepers, due to their ability to pick up infections quickly and their sensitivity to medications.

White Cloud Mountain fish are typically small in size and typically have a calm nature. As they’re relatively easy to maintain, this species is one of the best freshwater aquarium fish to opt for if you are a beginner. With them being another schooling fish, ideally, it is best to keep at least 6 fish in the tank. This breed of fish, however, are known to not deal with heat well, preferring water to be in the 18 – 22 C (64-72 F) range. Note: though these Minnow fish are similar to Goldfish due to both species preferring a colder water temperature, Goldfish have the tendency to eat minnow fish and therefore are not compatible together.

Many people may like this fish due to its aesthetically pleasing exterior and being an active player in the aquarium. All Cory species should be kept in schools to avoid loneliness and should also be kept in the company of small to medium-sized peaceful fish. Cory Catfish come in many different sizes and colours and are very easy to care for, making them one of the best types of freshwater fish for beginners.

The Dwarf Gourami is guaranteed to make your aquarium stand out. With their brightly coloured scales that vary in colour and shades, these fish make a vibrant addition to your tank. They are also known to be peaceful and easy to look after. Due to them being a schooling fish, it’s best for the Dwarf Gourami to stick together in order for them to feel safe and secure.

There you have our pick of the best freshwater aquarium fish! Any one of these freshwater fish species will make a beautiful and rewarding addition to a home aquarium.

Remember: it’s crucial to check the compatibility of each species before you purchase your new fish, as not all species are suitable to co-inhabit a tank together and may have different requirements.