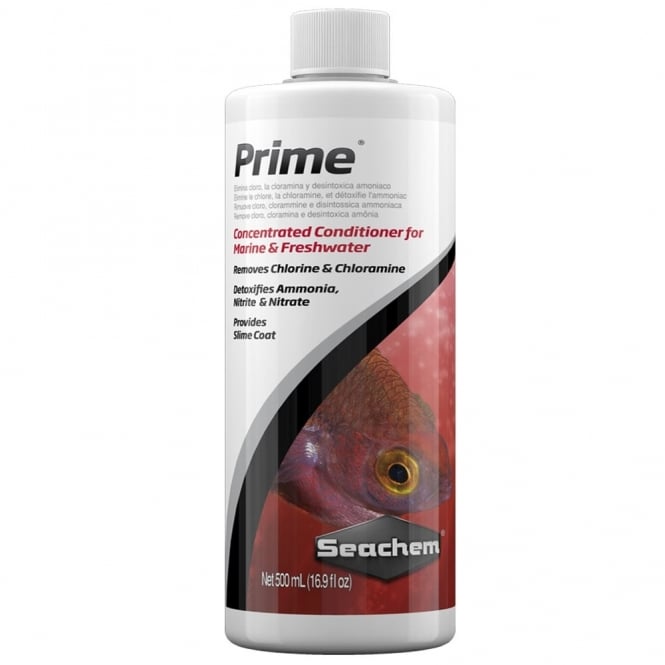 Code: SCPRIME
(24 Reviews)
Item in Stock Item out of Stock | Usually dispatched within 24 hours
Loading...
Earn with this purchase
Order within for delivery Monday 24th January with Express Delivery

Seachem Prime is the complete and concentrated conditioner for both fresh and saltwater aquariums. Prime removes chlorine and chloramine while also detoxifying ammonia by converting it into a safe, non-toxic form that is readily removed by the tank’s biofilter. Seachem Prime may be used during tank cycling to alleviate ammonia/nitrite toxicity. It will also detoxify any heavy metals found in the tap water at typical concentration levels. Prime is non-acidic and will not impact pH. Use at start-up and whenever adding or replacing water.

When transporting or quarantining fish, use Seachem StressGuard. When adding new fish, use Stability. Both are ideal for use with Prime.

Nearly all companies manufacture a product that removes chlorine. None of those, however, can compare in quality, concentration, or effectiveness to Seachem’s flagship product: Prime. A single 100ml bottle will treat 4000 litres of tap water. Prime will remove both chlorine and chloramines from tap water.

Prime also contains a binder which renders ammonia, nitrite, and nitrate non-toxic. It is very important to understand how those two functions work together. All dechlorinators operate through a chemical process known as reduction. In this process, toxic dissolved chlorine gas (Cl2) is converted into non-toxic chloride ions (Cl-). The reduction process also breaks the bonds between chlorine and nitrogen atoms in the chloramine molecule (NH2Cl), freeing the chlorine atoms and replacing them with hydrogen (H) to create ammonia (NH3).

Typically, dechlorinators stop there, leaving an aquarium full of toxic ammonia! Seachem takes the necessary next step by including an ammonia binder to detoxify the ammonia produced in the reduction process.

Be very careful when purchasing water conditioners. If your tap water contains chloramines, a standard sodium thiosulfate dechlorinator is not enough. Prime promotes the natural production and restoration of the slime coat rather than relying on artificial or non-native slime compounds. A further bonus for the reef hobbyist - Prime will not over-activate protein skimmers.

Directions:
Use 1 capful (5ml) for each 200L of new water. For smaller volumes, please note each cap thread is approximately 1ml. May be added to aquarium directly, but better if added to new water first. If adding directly to aquarium, base dose on aquarium volume. Sulfur odor is normal. For exceptionally high chloramine concentrations, a double dose may be used safely. To detoxify nitrite in an emergency, up to 5 times normal dose may be used. If temperature is > 30 °C (86°F) and chlorine or ammonia levels are low, use a half dose.

Of course I would