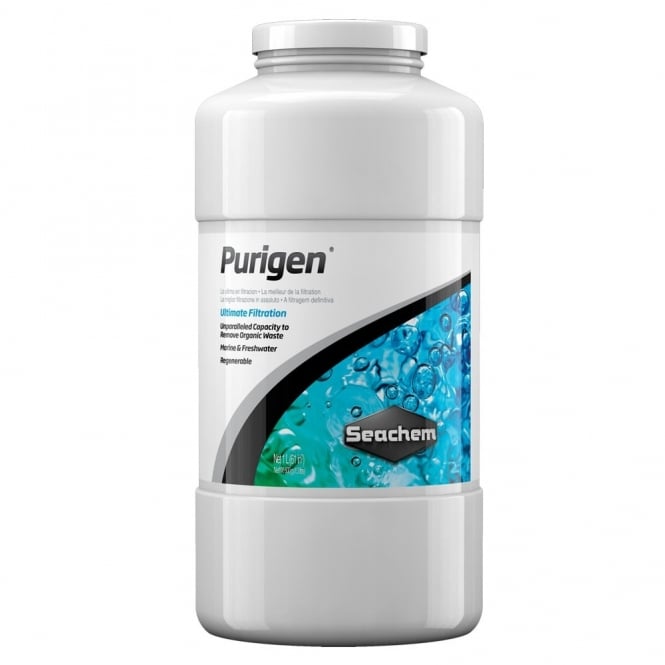 Code: SCPURIGEN
(6 Reviews)
Item in Stock Item out of Stock | Usually dispatched within 24 hours
Loading...
Earn with this purchase
Order within for delivery Monday 31st January with Express Delivery

Seachem Purigen is a premium synthetic adsorbent that is unlike any other filtration product. It is not a mixture of ion exchangers or adsorbents, but a unique macro-porous synthetic polymer that removes soluble and insoluble impurities from water at a rate and capacity that exceeds all other competing products by over 500%. Purigen controls ammonia, nitrites and nitrates by removing nitrogenous organic waste that would otherwise release these harmful compounds. Purigen’s impact on trace elements is minimal. It significantly raises redox. It polishes water to unparalleled clarity. Purigen darkens progressively as it exhausts, and is easily renewed by treating with bleach. The media is designed for both marine and freshwater use.

Seachem Purigen is the highest capacity organic filtration resin on the market. No other products can compare to its ability to clear haziness and polish water. Unlike other products on the market which are simple ion-exchange resins, Purigen is specifically designed to be an organic scavenging resin. When ion-exchange resins are filled to capacity by metals and other contaminants, Purigen has barely begun to reach its potential. It generally ignores simple elemental compounds, having an extreme affinity for nitrogenous organics. The primary source of nitrogenous compounds in an aquarium is waste. Fish, corals even plants produce nitrogenous waste, Purigen removes that waste faster and more completely than anything else on the market.

Purigen possesses enhanced capacity owing to its vast surface area. All other resins on the market are purely spherical extruded beads. These beads remain smooth even under a microscope. Purigen is both spherical and macroreticular. It has microscopic pores that increase its usable surface area to many times that of a purely spherical resin.

Seachem Purigen can also be regenerated. As it adsorbs waste products, Purigen will change color from a pale blonde to a dark brown, almost black. Once it is exhausted, it can be regenerated with a solution of bleach and water. The bleach will literally “burn off” the organics that have been removed from the tank. Watch out for products that claim to be regenerable with a brine solution. That is the regeneration procedure for ion-exchange purposes. A brine solution will not remove organics. While such resins have a limited capacity for organic adsorption, a brine regeneration process only replaces removed ionic compounds. It does not destroy large organic molecules that were removed, which is the primary function of organic adsorption resins.

Directions:
Rinse before use. Use in a fine mesh (180 micron or less) filter bag such as Seachem’s The Bag. Each 250mL treats up to 1,000L for up to six months. Exhaustion is indicated by a pronounced discoloration of the beads to dark brown or black.

Regeneration:
Soak in a 1:1 bleach:water solution for 24 hours in a non-metallic container in a well ventilated area and away from children. Use regular 8.25% hypochlorite household bleach (non-scented, no dyes, do not use a splash-less bleach). Rinse well, then soak for 8 hours with a solution containing 4 tablespoons of Prime, or equivalent dechlorinator per cup of water. Rinse well. For freshwater use, soak for 4 hours with a solution containing 2 tablespoons of buffer per cup of water. Original colour and full activity should now be restored and Purigen is ready for reuse. Caution: some slime coat products may permanently foul Purigen and render regeneration difficult. Do not reuse if odor of bleach/chlorine is detectable. In case of doubt, soak beads in small quantity of water and test for residual chlorine with a chlorine test kit.