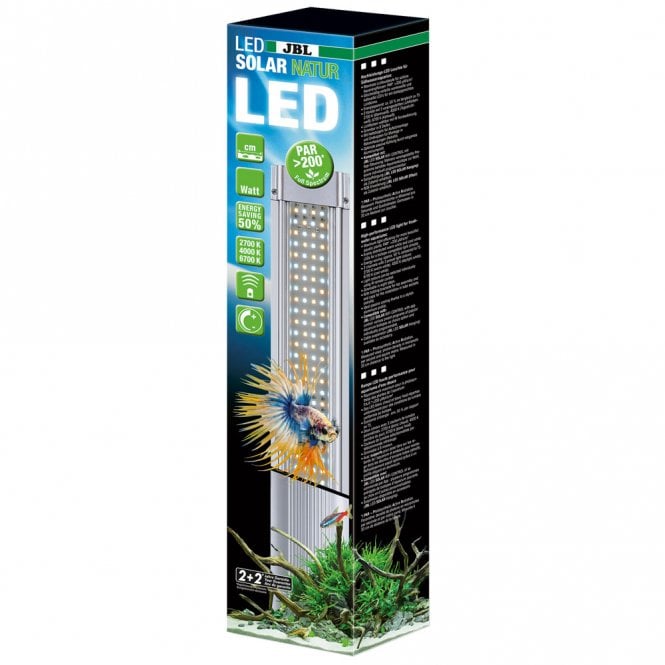 Code: JBLSOLARNATUR
(2 Reviews)
Item in Stock Item out of Stock | Usually dispatched within 24 hours
Loading...
Earn with this purchase
Order within for delivery Monday 31st January with Express Delivery

The JBL LED Lighting has multiple installation possibilities including tank top - using the extendable brackets, retro fit - into existing T5 or T8 strip-lights and hanging - with the use of the JBL LED Hanging Kit (available separately). They come supplied with everything required for a quick and easy set up the LED Solar Natur Lights include an IP67 water-protected LED light, remote control, LED driver, receiver, connection cable, holding brackets for top assembly and retro fit end caps for the installation in either T5 or T8 strip-lights.

Because LED's have only really become more energy-saving than fluorescent tubes recently, there has generally been no technology and no demand to optimise the LED light spectrum for aquarium plants. Up to now LED's have only been used in the technical sector and in the home. The light spectrum of aquatic plants, however, varies considerably from the spectrum of LED's used in the home or for torches. For planted aquariums it is a matter of the Photosynthetic Active Radiation (PAR) range, and a full spectrum which contains the total range within the visible light spectrum. Only with those two components could the perfect lighting for aquarium plants be manufactured.

Since JBL was the first manufacturer worldwide to develop a full spectrum modelled on sunlight with its JBL Solar Fluorescent Tubes, their development department didn’t just want to use the available home spectrum's for LED aquarium technology, it wanted to create a Solar full spectrum, especially for aquariums. This took some time – but now it is available in the form of JBL LED Solar Natur Aquarium Lighting.

Always a straightforward order, delivery and a fair price. As a returning client I upkeep my opinion this is a great company to buy from.

The item was in very good condition as was advertised.It arrives on time as they said.