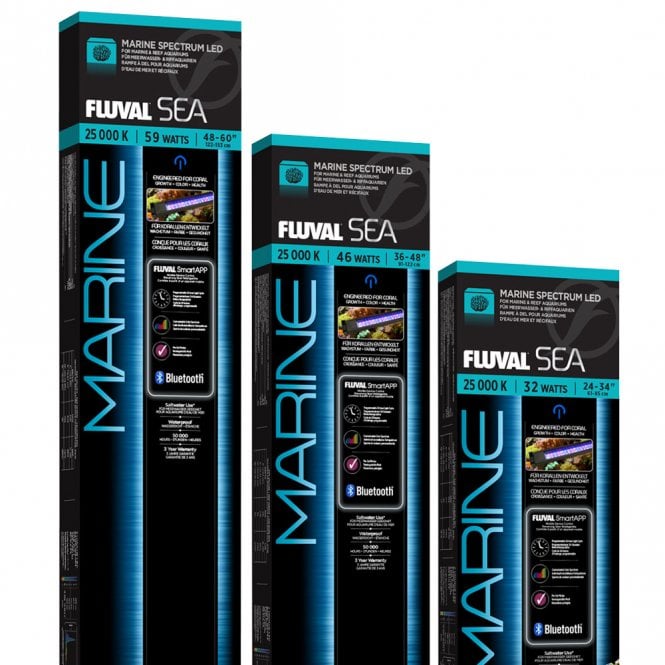 Code: FLUMARINELED3.0
(3 Reviews)
Item in Stock Item out of Stock | Usually dispatched within 24 hours
Loading...
Earn with this purchase
Order within for delivery Tuesday 1st February with Express Delivery

Mimic the natural cycle of the sun and moon to create a realistic environment for your fish. For convenience, select one of three pre-set light configurations. Choose from Sunny Reef, Deep Sea Glo or Colour Burst. Independently control colour to suit your lighting needs. The Marine Spectrum utilise LED's which feature 7 unique band waves for full spectrum results.

Next generation H.L.E (High Luminous Efficiency) LED's have improved overall light output and spectral quality, while consuming the same power as before. These Fluval Marine LED's also feature a higher optimal operating temperature, yet remain cool to the touch thanks to a new, fully encased aluminium shell. The shell not only provides effective heat transfer, but also offers improved protection against water ingress and humidity with an industry-leading IP67 waterproof rating.

Each individual LED casts 120° of illumination for wider area coverage and uniform lighting without dead spots. Unlike other LED units, the Marine Spectrum 3.0 can be safely mounted directly above the water surface for greater light penetration and efficiency.

Very bright, i am very happy!

Great light for marine aquarium but the let down is the app for controlling the light, which you can't program too go completely off at night.