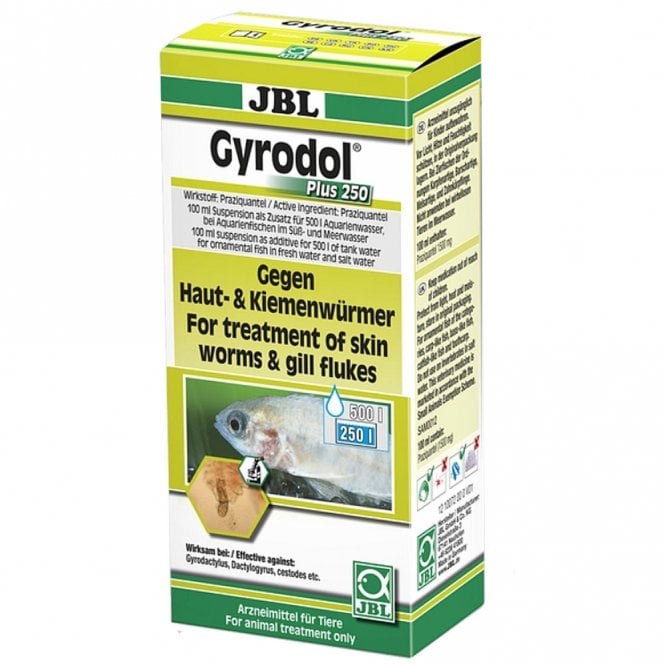 Code: 1007200
Item in Stock Item out of Stock | Usually dispatched within 24 hours
Loading...
Order within for delivery Tuesday 14th July with Express Delivery

About 90% of all fish diseases can be put down to a weakening of the fish’s immune system. This means the application of remedies can fight the pathogen but doesn’t generally eliminate the cause. It is therefore very important to determine the cause.

Skin flukes (Gyrodactylus):
Adult skin flukes live as parasites on the skin of fish. With the help of JBL Gyrodol Plus 250, both the worms on the fish and those in the water can be killed reliably. The worms are live bearing, (with the exception of the species of the Dactylogyrus genus, which are egg-laying and primarily parasitize on the gills of the fish), with the larvae having to find a host fish within 48 hours. The chances of the larvae not finding a host fish are greater in a planted aquarium, because they swim towards shadows, which are often produced by the plants. Skin flukes desert a dying fish very quickly, so that they can no longer be identified on the dead fish. Worms that have fallen off of a fish can survive without a host for up to 10 days, depending on temperatures.

Gill flukes, Dactylogyrus, monogenic flukes:
Disease symptoms: Rapid breathing, wide open gill cover, apathy and paleness. A low infestation with gill flukes isn’t a problem. A problem only occurs when the worms massively reproduce. This can be only observed in excessively overstocked aquariums or ponds and where there is a lack of hygiene. Another kind of slime formation happens in the gills of the fish if fish are infected with gill flukes. The fish feels the worms in the gills, which anchor themselves there, and tries to get rid of them through slime formation. Unfortunately this doesn’t work and the fish suffocates on its own slime. For gill flukes rapid treatment with JBL Gyrodol Plus 250 is advised.

Always read instructions prior to performing any treatment.

Be the first to review JBL Gyrodol Plus 250 100ml. Write a review